SOKE SHO DAI W.DAN HAUSEL (born in 1949 in Salt Lake City, Utah, U.S.) a polymath of martial arts, geology, writing, astronomy, art, and public speaking. Hall-of-Fame 10th degree black belt grandmaster of Shorin-Ryu Karate and Kobudo, mineral exploration geologist who made several gold, colored gemstone, and diamond deposit discoveries in Alaska, Colorado, Montana and Wyoming, author of more than 600 publications including books, maps, professional papers and magazine articles, public speaker, artist, former astronomy lecturer for the Hansen Planetarium in Utah, and former rock musician.In 1999, Professor Hausel developed a hybrid style of Okinawn Shorin-Ryu Karate and Kobudo that was recognized by Zen Kokusai Soke Budo Bugei Renmei (an international governing organization of martial arts grandmasters) as a legitimate martial art and was awarded Soke Shodai (1st generation grandmaster) of this art. He is a member of more than a dozen Halls-of-Fame including the North American Black Belt Hall of Fame, the World Martial Arts Black Belt Hall of Fame and others[1] [2]. In 2004, he was awarded Judan (10th degree black belt; the highest rank possible in Okinawan/Japanese karate) and is the only known martial artist to ever be awarded this rank in Wyoming. 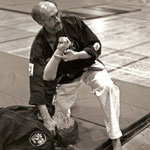 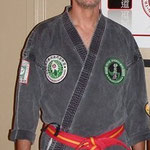 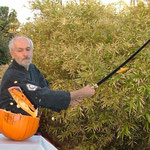 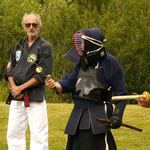 While at the University of Wyoming, Professor Hausel developed a traditional martial arts program at a university. In 1999, the UW Campus Shorin-Ryu Karate and Kobudo Club was awarded the Juko Kai International Top-Rated Martial Arts School of the Year. In the following year, Professor Hausel was awarded Juko-Kai International's Top-Rated Soke of the Year. The program provided martial arts (karate, kobudo, jujutsu, self-defense and samurai arts) training for a few thousand students, faculty and staff from 1977 and continues to this day. Hausel began training in martial arts in the 1960s at the Black Eagle Federation Kyokushin Kaikan Dojo.[5]

While at the Wyoming Geological Survey on the University of Wyoming campus (1977-2006), Professor Hausel discovered dozens of colored gemstone, diamond and gold deposits and occurrences[7] [8] [9] . As a consultant for WestGold, a crew of six geologists including Hausel discovered the Donlin Creek gold deposit in Alaska in 1988; now recognized as one of the larger gold deposits discovered in North America in the last 100 years[10][11]. He was inducted into the National Rock Hound and Lapidary Hall of Fame[12] in 2001 for contributions to geological sciences and also presented the Prospectors and Developers Association of Canada's 2009 Thayer Lindsley Award for discovery of a major international gold deposit.

In addition to the Donlin Creek gold deposit he discovered the Rattlesnake Hills gold district in Wyoming in 1981 – a district with dozens of gold anomalies that is currently being explored and developed for both Kalgoorlie- and Cripple Creek-type gold deposits[13]. Years later he found the Palmer Canyon, Grizzly Creek and the Sherman Mountains colored gemstone deposits in the Western US[14] and identified several anomalies potentially related to diamondiferous kimberlite in Colorado and Wyoming[15]. He contributed to nearly one hundred books[16] [17][18] and 650 papers and maps on geological sciences and martial arts [19]. Hausel is a diamond geology specialist and contributes to articles fpr the ICMJ Prospecting and Mining Journal[20] [21] .